Not the title you would expect to read from one country being a world power and the other being a small country of 4.7 million people and no army. Whats to blame? 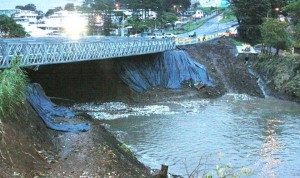 It turns out if any of you know Costa Rica terrain it is filled with uneven landscape and lots of rain. To the tourist it makes for a lovely mountain green landscape to take pictures. To the locals it turns into a day to day challenge to keep transit at a functioning level for the Costa Rican society. Although we don’t think Costa Rican’s would change their landscape for anything.

According to the news source “Inside Costa Rica” the reason US Army General Tim Mackey mentions Costa Rica as being to blame for difficulties in the Afghanistan war which is directly related to the rain and mountains of Costa Rica. Costa Rica has been receiving bailey’s bridges from the US for years which have made life much easier for the local people.

Mackey mentions that in a war zone he needs to be able to move his troops from place to place and having bailey bridges is a key component of making that happen. “Over the course of the last several years, our supply of such bridges has been dwindling as our government has diverted all of our bailey bridges to Costa Rica,” Mackey added. It seems every rainy seasons somewhere in Costa Rica will be requesting a baileys bridge because of a washed out bridge. If what Mackey says is a bit of an exaggeration we don’t know but there is surely some more numbers and facts to look at to see just how many bridges and how much this affected the war.

The president of Costa Rica Laura Chinchilla has responded by saying how important the bailey bridges are for keeping the country operating. She has quoted different Chinese companies on making the bridges and is looking for alternatives to get the bridges back to the US.

2 comments on “US Blames Costa Rica for trouble in Afghanistan War? WHAT?!”