What might have been the longest six month wait between two soccer games in the history of Costa Rica. This 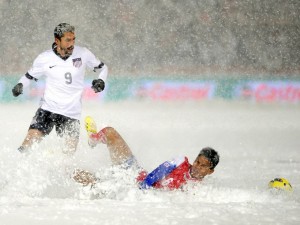 past March the Costa Rica soccer team played a game in Denver Colorado that most Arctic Scientist would not even ventured outdoors in. For many of the Costa Rican players chances are it was the first time they had seen snow other than the famous “granizados” or shaved ice thats often sold in beach towns. If any of you are familiar with soccer in Latin America you know its not a joking matter. The consensus was that the US team offered an unfair game for the Costa Rican team. Memo to US soccer federation: THATS A BIG NO NO!

The Costa Rican’s were able to express their feelings during the arrival of the US team with a couple of launched eggs as the bus went cruising by. All in good fun it turned out to be a good friendly game with the Costa Rican team winning 3 to 1 and US/Costa Rica foreign relations back stronger than ever.

To say the least the country went crazy as this puts Costa Rica in very good contention to attend the world cup in Brazil in 2014!