To give you an idea we humans have been roaming this planet for a mear 200,000 years and if you compare that to the amphibians who arrived 400 million years ago it seems like we showed up just yesterday. To really understand amphibians while visiting Costa Rica you might want to consider the Monteverde area. It is here that before long you will hear about the extinction of the Golden Toad. The Golden Toad has turned into the postcard amphibian of what has been a long list of extinctions in the last 20 years since the Golden Toad extinction in May 15th 1989. 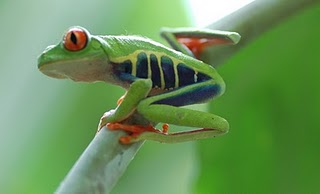 Extinction is a natural process of life and is part of how we have become evolved into the great thinkers that we are today but it is not natural when extinction is called by another species careless activity. This is why the amphibian (amphibian - organism that can live in two worlds) is always very often brought up with global warming because it is the first to go extinct with the warming of the planet. Amphibians depend on water and also have very sensitive skin which makes them quick victims of global warming. This is not the way to treat the first creature that developed legs on land which in turn are what the two legs humans now use.

There have been 4800 species of amphibians described. The amphibians have separated themselves into three different groups which are the salamanders, caecilians, and the frogs/toads.

Costa Rica has been a hotspot for those interested in studying amphibians. Because of its attention to conservation and location in the tropics there are a number of different species to be found in Costa Rica. When you visit on a family vacation or just an ecotourism adventure you will probably be most impressed by the frogs of Costa Rica. With some of them most spectacular colors of the tropics coming from frogs the side of a coin. The poisonous dart frogs and tree frogs of Costa Rica can be found all over the rainforest and even on most postcards for their beauty. We know of a perfect spot where we can almost always find the blue-jeans frog on our way to the whitewater rafting Pacuare River adventure and we hope we can find him there for many years to come.

Some Costa Rican Amphibians of Interest: